Posted in: Trip Reports
By Talley Kayser
No comments
More from this author

Two weeks into my month-long trek on the Sierra High Route, I was fed up.

Depending on my mood, I could blame the storms, the heavy snow year, the resupply delay, the yeast infection, and/or my own limitations––but none of the available excuses changed my situation. In the first fourteen days of my SHR attempt, I had spent only five days moving cross-country over the rugged, alpine terrain I most craved. 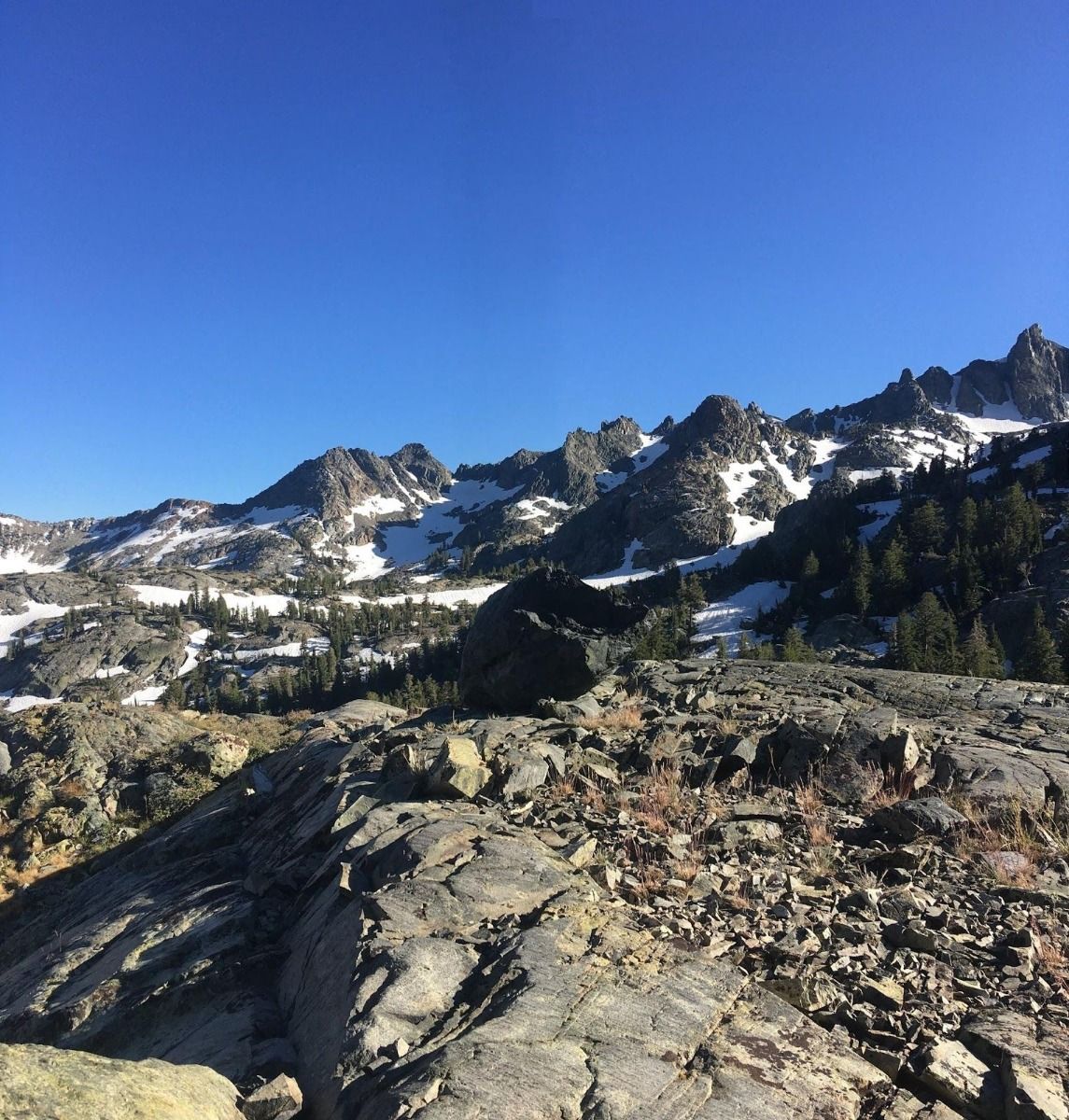 Those five days “on route,” mind you, were gorgeous. At the foot of Cirque Pass, for example, I drifted off to sleep underneath a swarm of stars, and woke to light: not sunlight, but a full moon. It flooded the high, wild mountainside so suddenly that it yanked me straight out of my dreams. The ascent to the top of the pass that followed wasn’t effortless, but it was absolutely blissful.

But for too much of my trek, I’d been stuck below 9,000 feet, often descending to the high-traffic John Muir Trail as I reconfigured, then reconfigured again, my shifting logistics. That I had successfully completed these stretches of the SHR in 2018 did little to soothe me: I wanted to be back above timberline, working my way over the high wild snow-bound passes that distinguish the Route from other Sierra objectives. 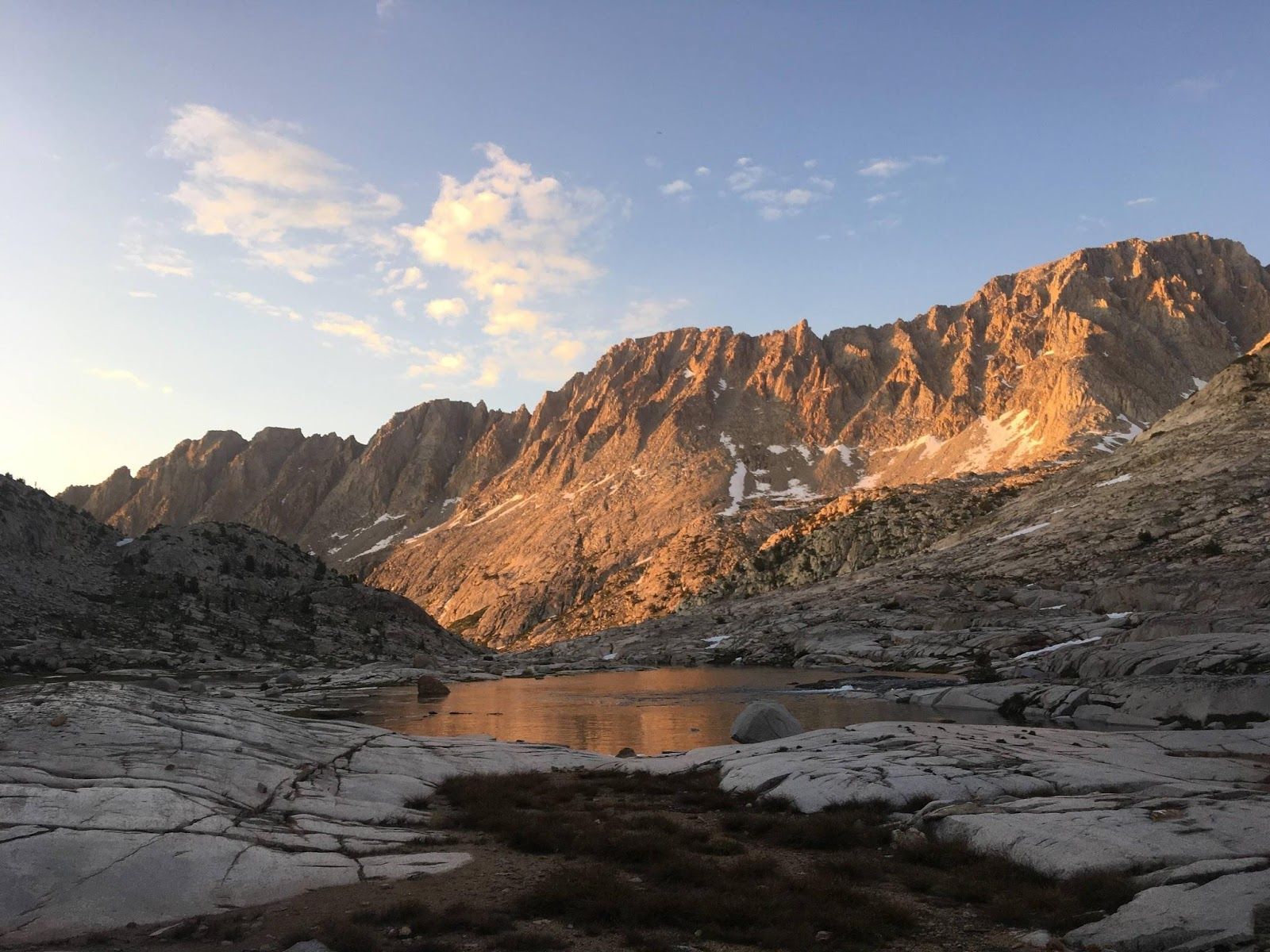 So it was a relief when, after flying through the third section of the High Route, I had created enough leeway to savor the meandering final sections of the route (from Devils Postpile to the terminus at Twin Lakes).

Though this stretch of the SHR isn’t particularly straightforward, it traverses some of the most classic territory in the Sierras. Passing the Minarets via Cecile and Iceberg Lakes was a highlight, even if the awkward climb down to Iceberg included a few harrowing moments. 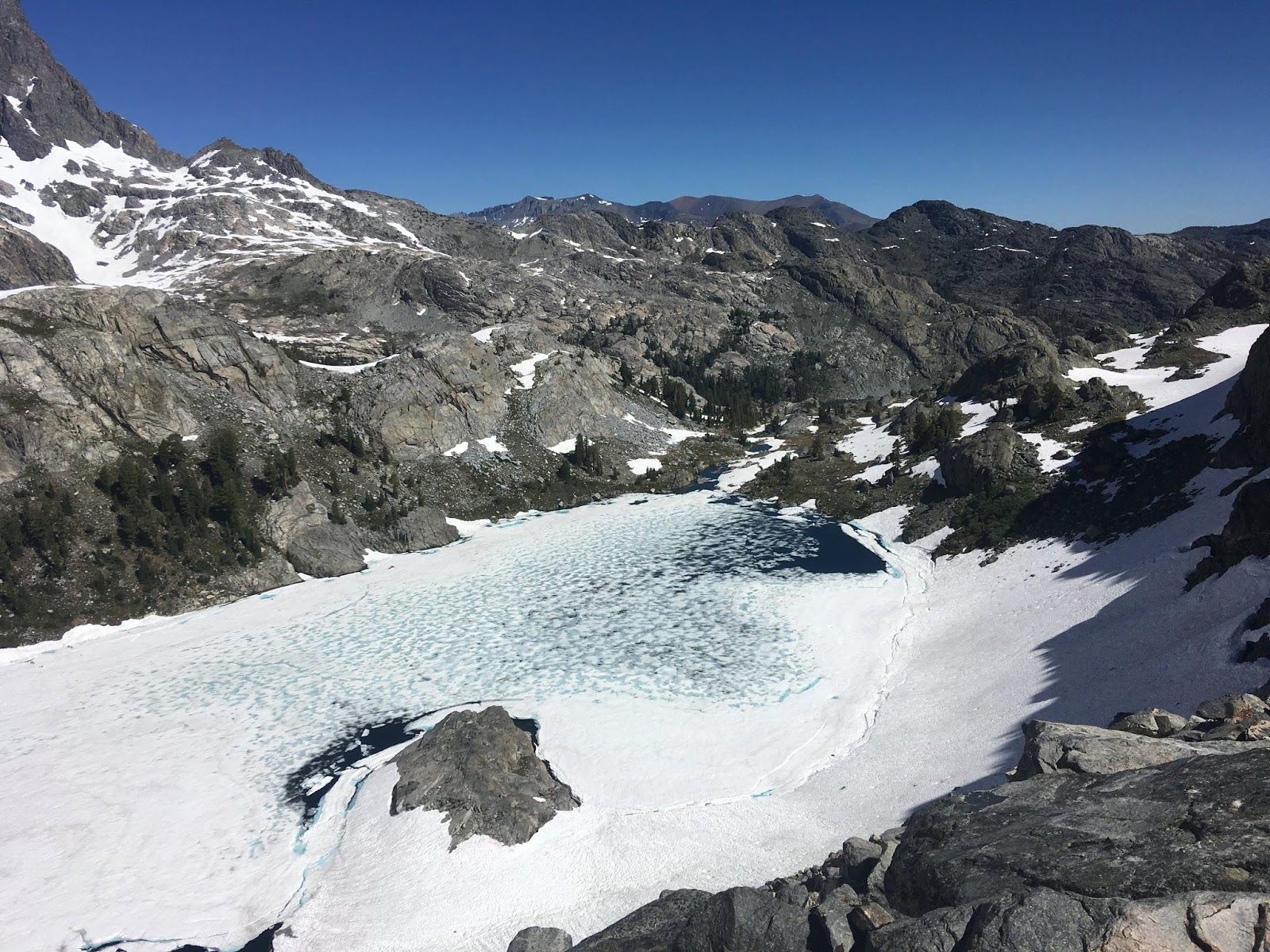 Not pictured: the nigh-vertical slapdash jumbled mess of loose scree that comprises the descent to Iceberg Lake.

The talus-ridden passage from North Glacier Pass to Lake Catherine was also well worth the struggle, leading not only to an incredible back-door view of Banner and Ritter but also to a super-fun route-finding section that descends (but definitely doesn’t follow) Lake Catherine’s dramatic outlet.

And what better way to end such an adventurous day than fording a waist-deep, snowbound lake? As if I didn’t have reason enough to be grateful for a hot meal.

The best was yet to come, though. In 2018, the final stretch of the Route––already a tricky bit of route-finding––had been occluded by heavy firesmoke; moreover, I’d had a truly heinous thunderstorm experience that included (ahem) mild electrocution. It was strange and wonderful to cross this same terrain under clear skies and without storm pressure, seeing the views of Bench Canyon that Steve Roper, the architect of the High Route, calls “one of the most sublime valleys in the range.” 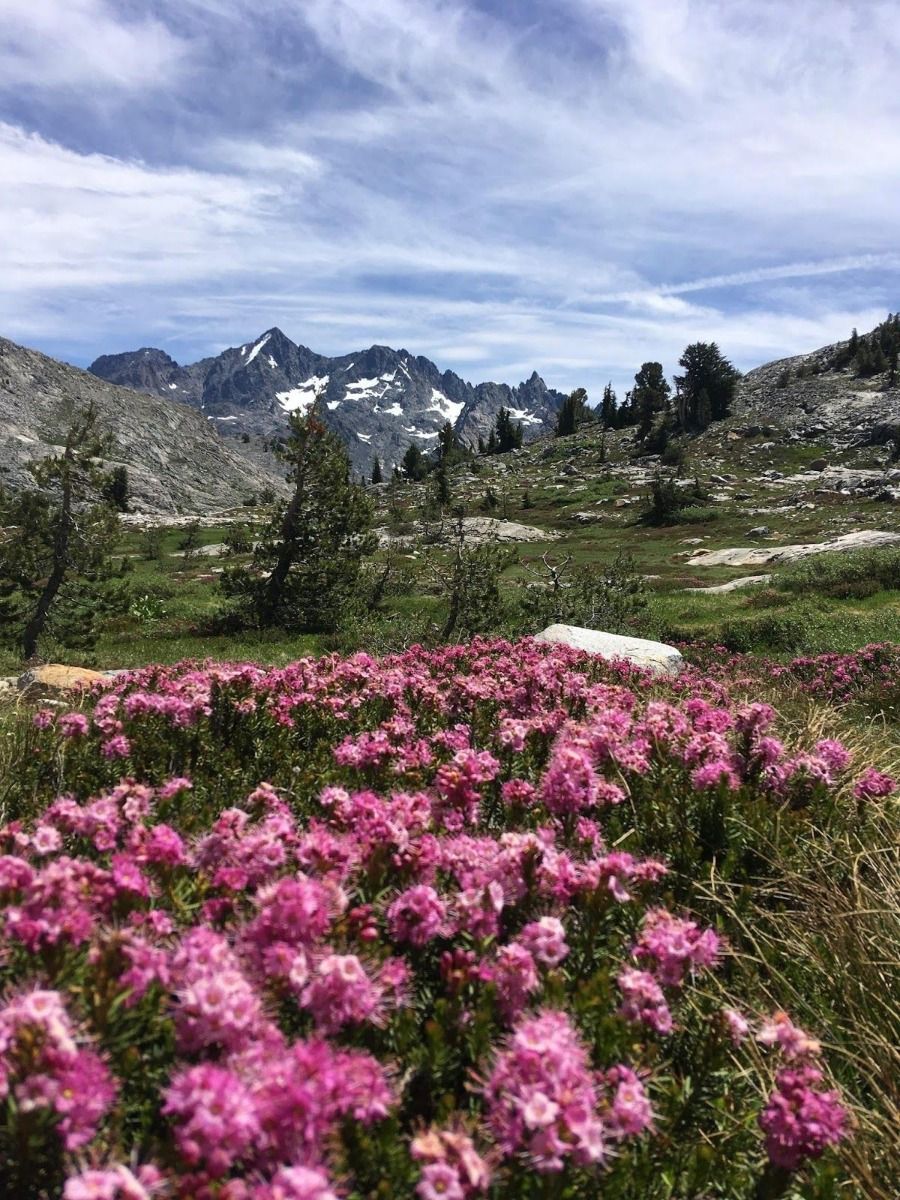 My new favorite canyon. No, I won’t tell you exactly where it is.

Descending to bustling Tuolumne Meadows after such remote, wide-flung views was certainly a change of pace, but before too long I was headed up again––this time toward Mt Conness and its environs. 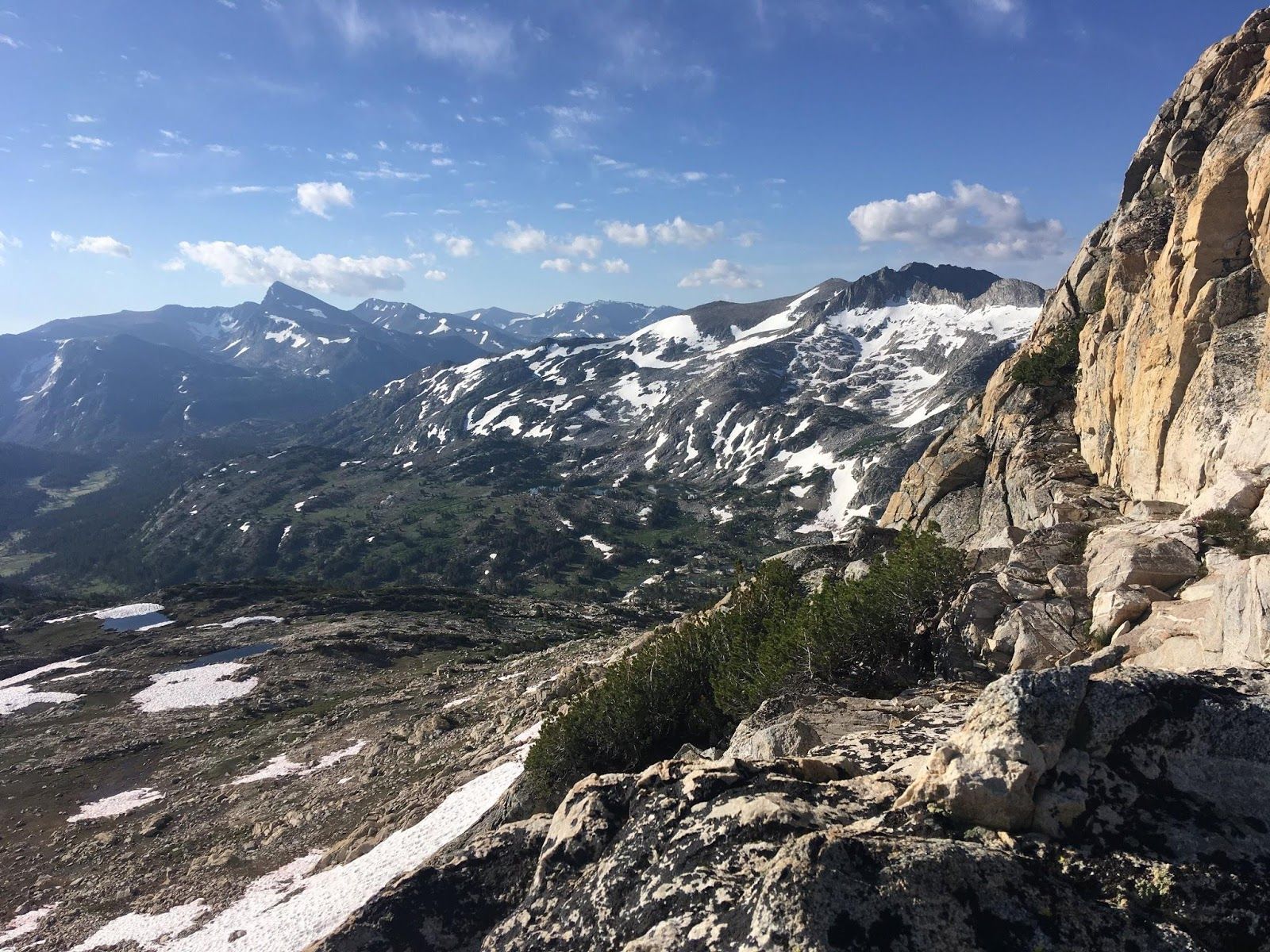 View from the east ridge of Mt. Conness.

After moving down Conness’ spur, I readied myself for Sky Pilot Col, one of the burliest SHR obstacles. Perversely, Sky Pilot had been my favorite pass in 2018, and I looked forward to making the 1,300 foot descent in snow that could be glissadable. But gathering storm clouds warned me it was not the best day to travel high. When I heard an epic peal of thunder, I followed Roper’s alternate route, scootching west to beautiful (and much lower) McCabe Lake and thence to Virginia Canyon.

I could reach the terminus at Twin Lakes the next day, but I wasn’t yet ready to leave the Sierras. Despite my rough start, the High Route had unlocked into what I knew it to be: a challenging but ceaselessly rewarding trek from beauty to beauty to beauty. And thanks to my frustration-induced hustle, I had one extra day available to me.

So it was that, after a sketchier-than-it-could’ve-been descent from Stanton Pass, I spent a full afternoon––and a full night––and a slow morning––in Spiller Canyon, under the alternating shadows of Whorl Mountain and Virginia Peak. Huge clouds trailed huge patches of shade over the mountainsides. A sleek raptor dove from a tree branch and uprooted a rodent from the wildflowers. A Clark’s nutcracker chased its parent around, flaring its wings and begging.
Sunlight polished Spiller Creek to a blinding silver. I savored it all, feeling rapt and aimless and content as a kid.

I left the High Route via Horse Creek Canyon, a familiar friend. The top apron of snow at Horse Creek Pass bore no footprints besides mine, but the descent quickly shifted from austere to lush––and from solo to heavily trafficked. Suddenly, I became very aware of my appearance. Dust coated my face, sweat stained my shirt, at least one large glob of sap clotted my braid, and my pants featured wide rips at one knee and both asscheeks. Still: I hailed everyone I passed, grinning broadly.

My new favorite pass . . . and the reason I invested in a DSLR immediately after returning home. Ranges like this deserve better. 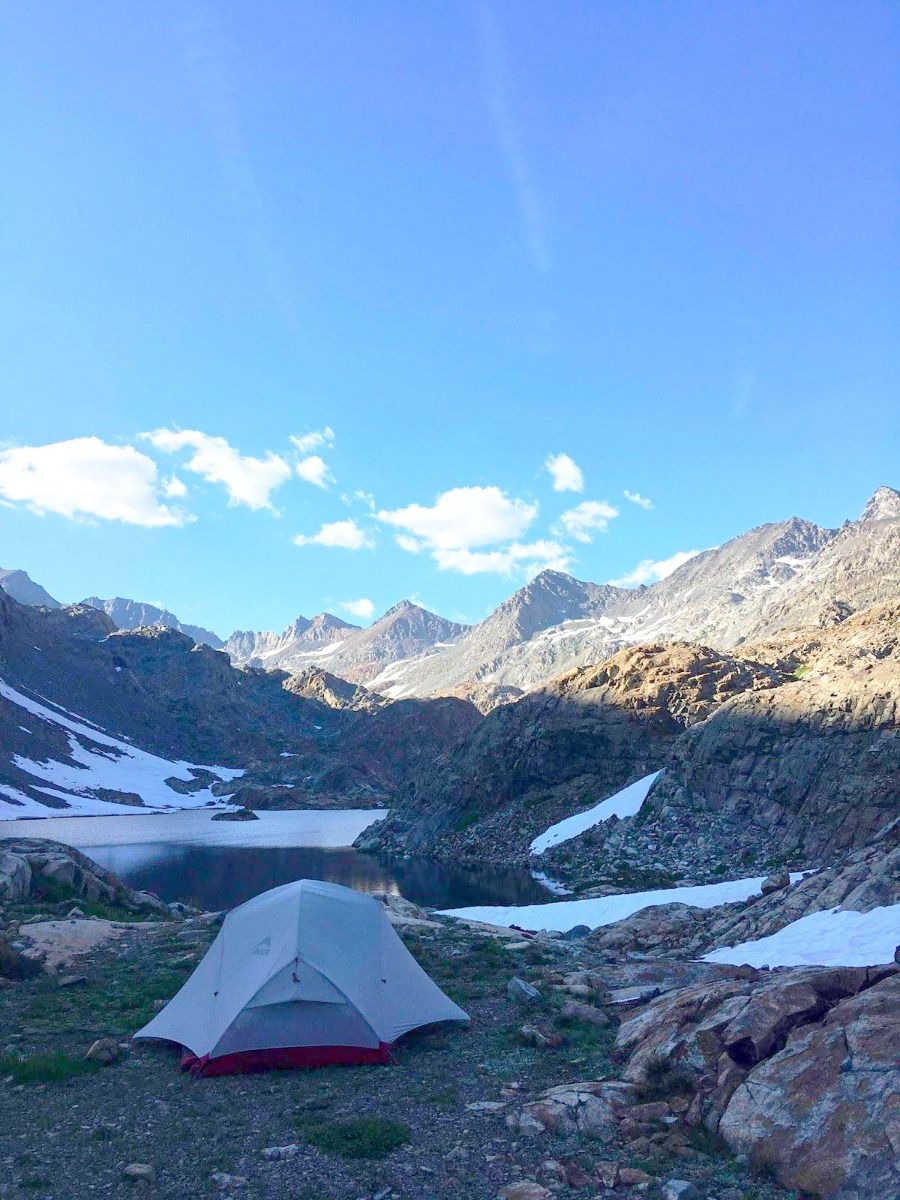 Fording the northernmost Twin Island Lake = Brrrr. I got into my sleeping bag fast. 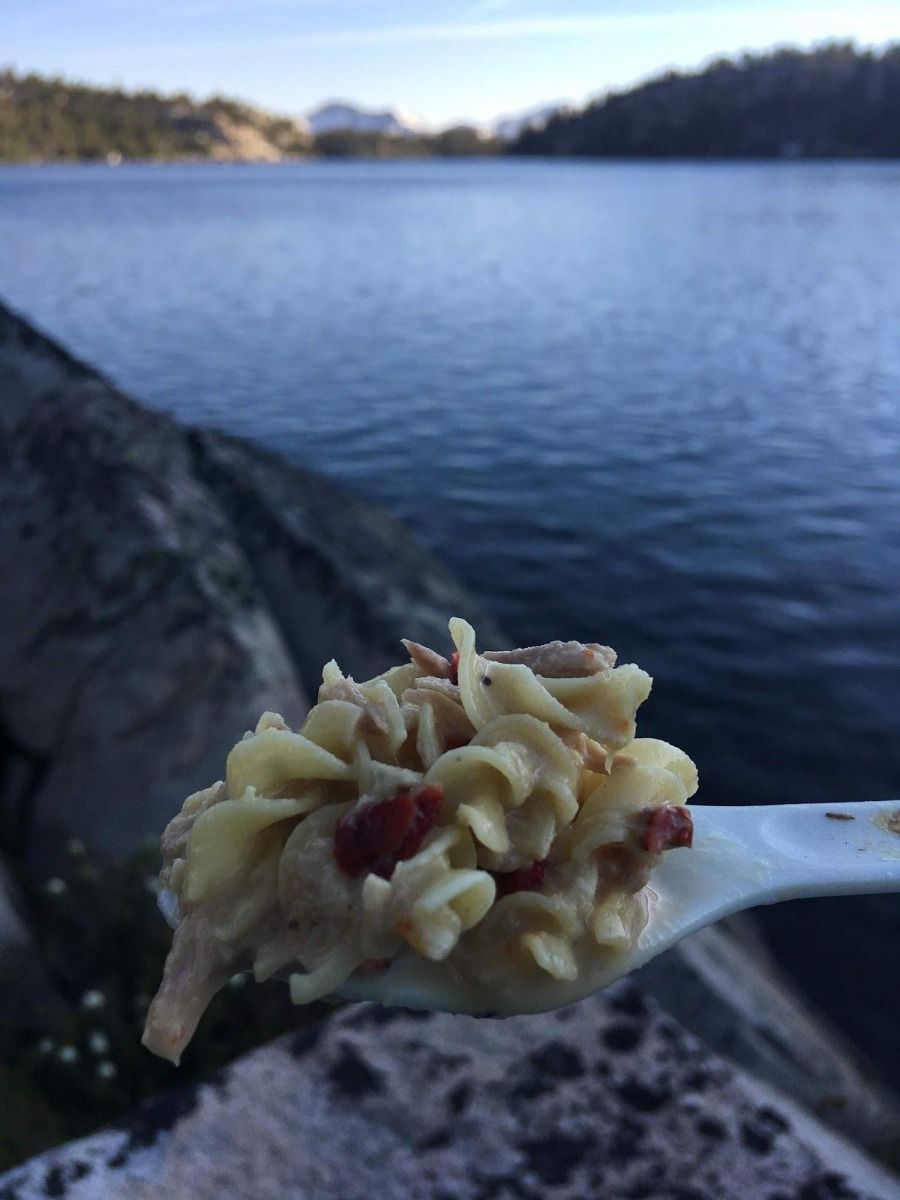 Whether above or below treeline, I appreciated my evening fuel from Backpacker’s Pantry! 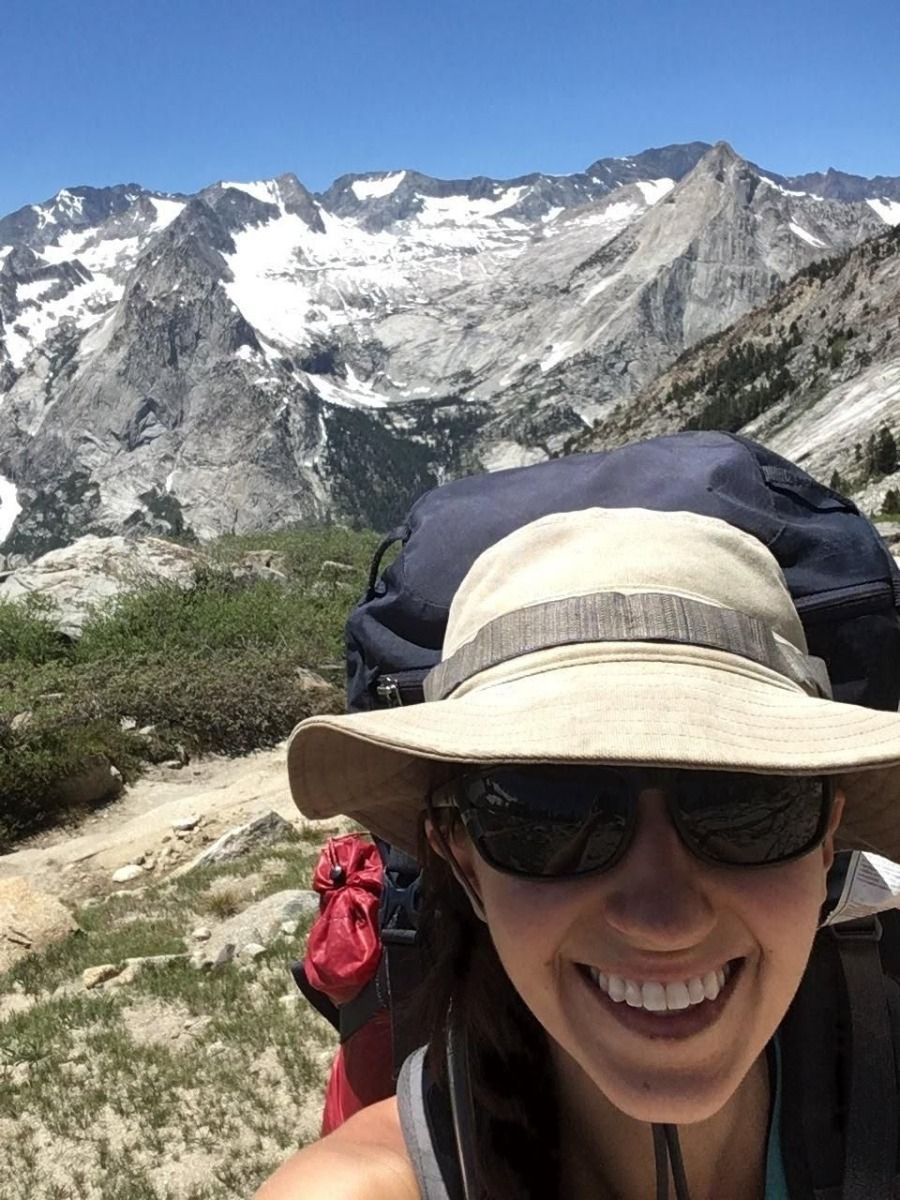 Not that the JMT is particularly ugly. Coasting through LeConte Canyon, for example, was a real pleasure. 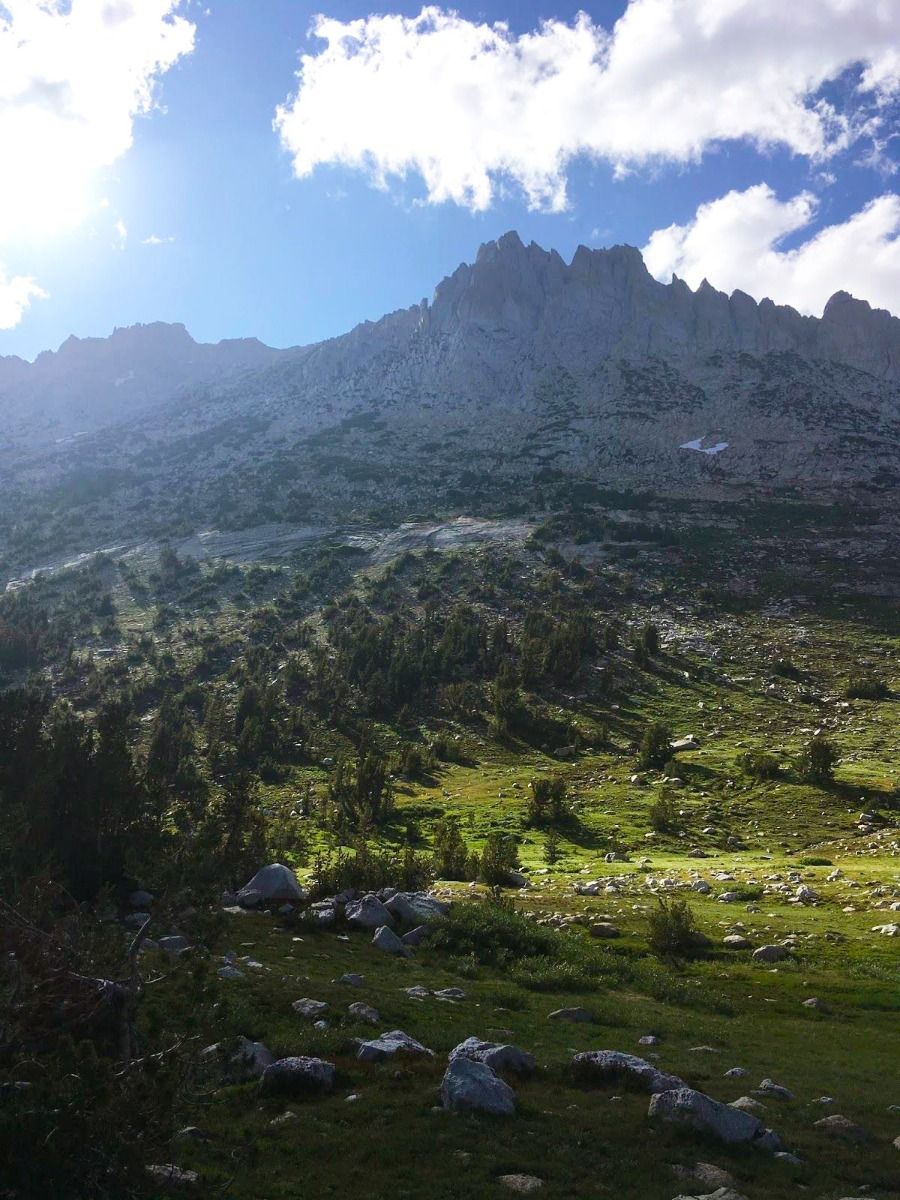 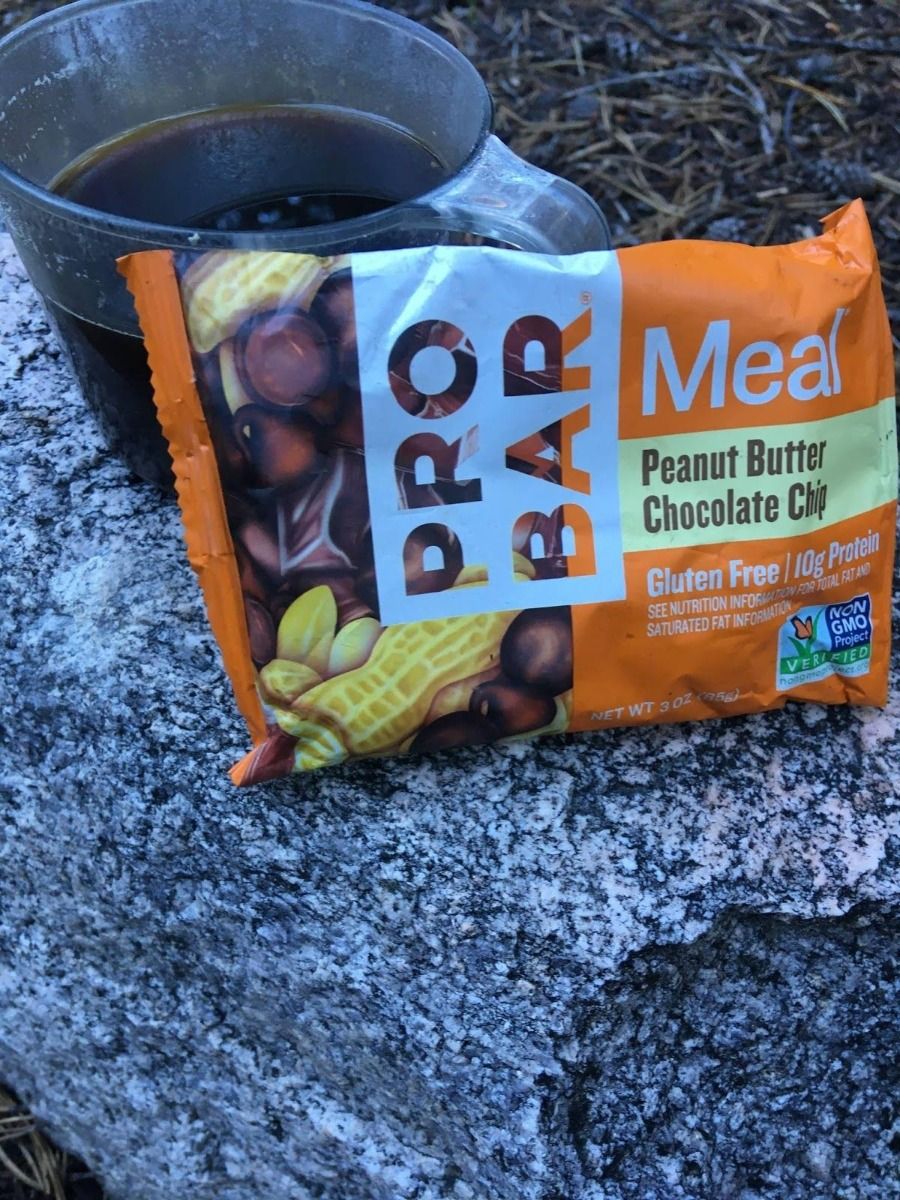 Never take a good breakfast for granite. Or for quartz monzonite. 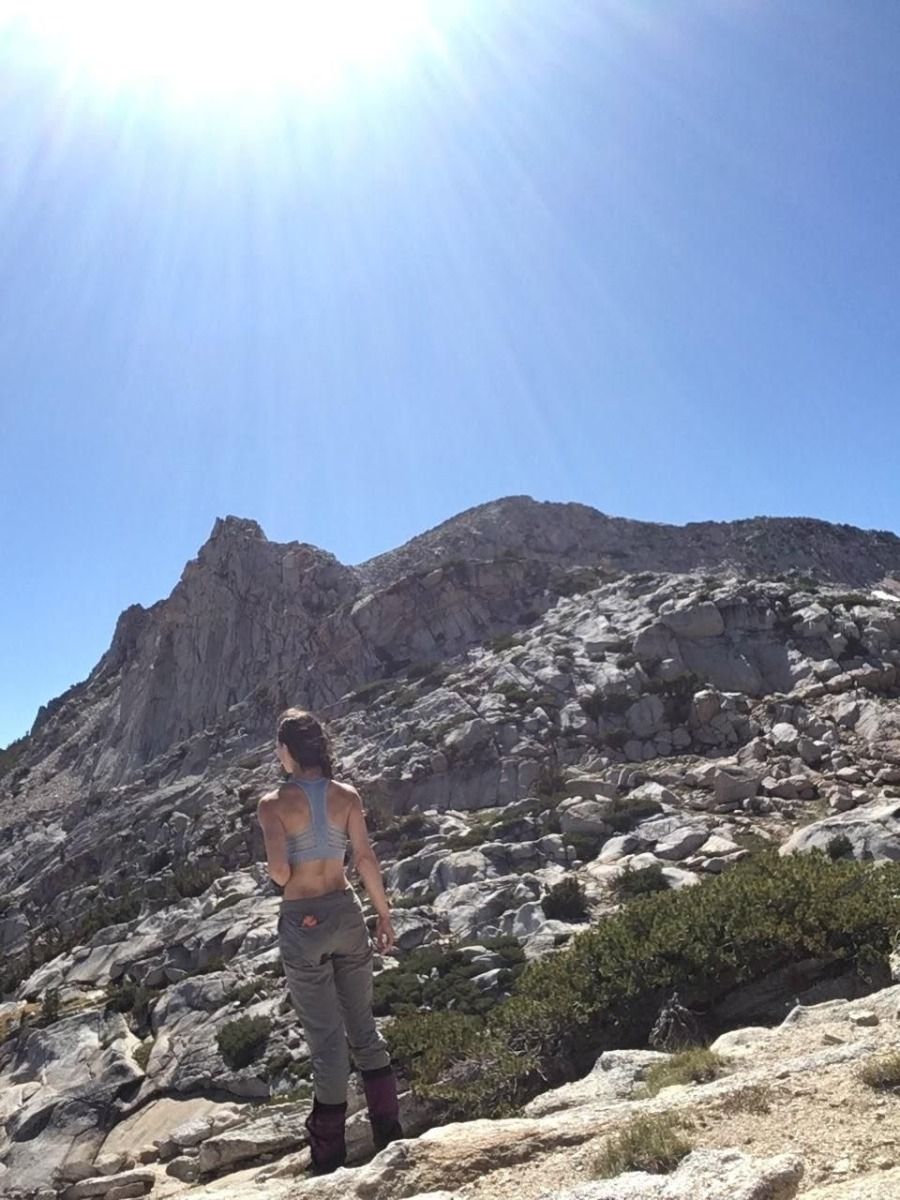 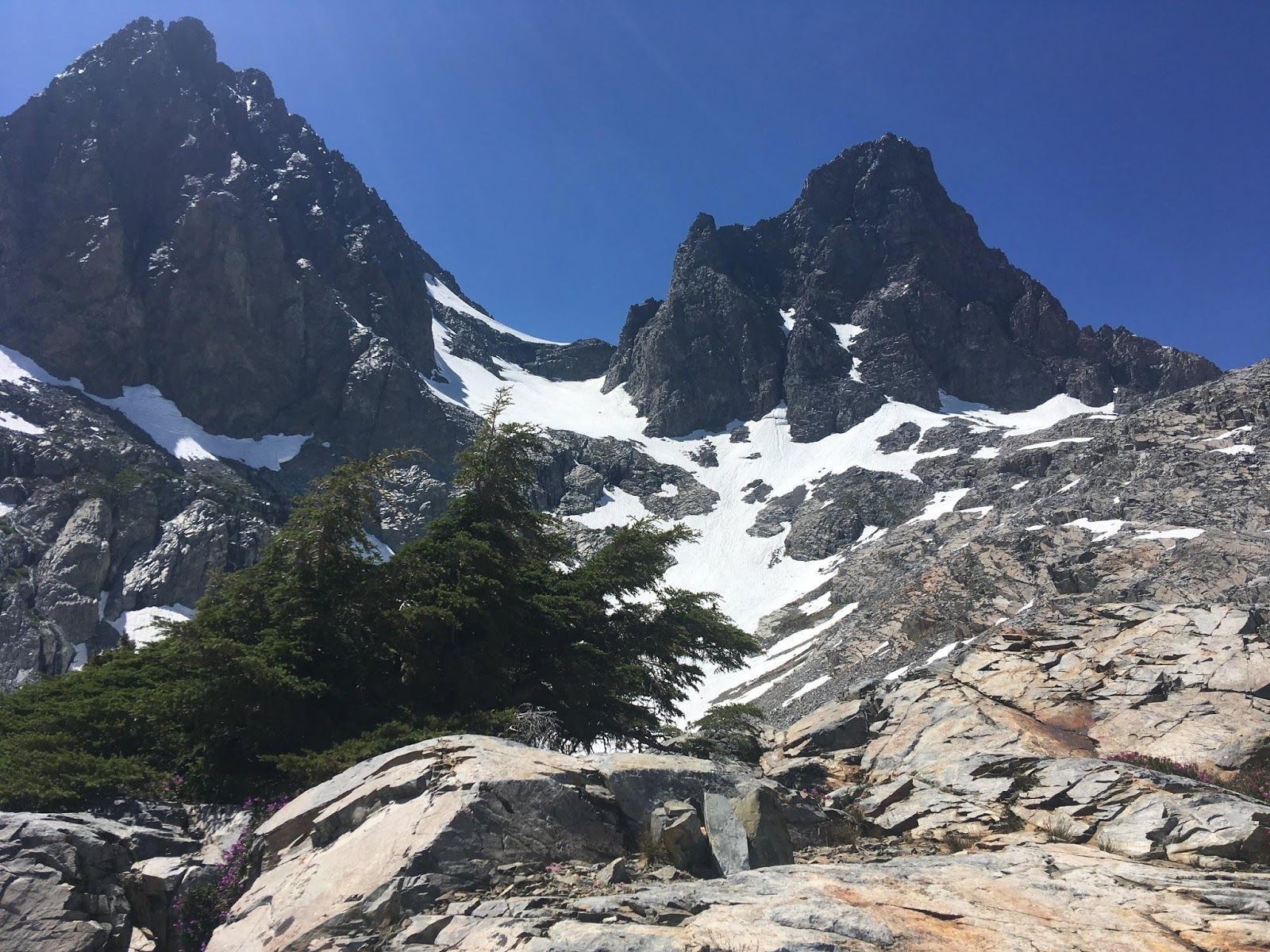 The route passes iconic Banner and Ritter on both east and west sides.

-Each year, the Kyle Dempster Solo Adventure Award will be given to an American solo adventurer embarking on a journey that embodies Kyle’s passionate spirit and love of exploration, with an emphasis on storytelling and Leave No Trace ethics.
Liberty Mountain partners with the family and close friends of the late Kyle Dempster, Outdoor Research, Higher Ground Coffee, Black Diamond, Keen Footwear, PROBAR, Hyperlite Mountain Gear, Alpinist Magazine, Duct Tape Then Beer, and Munir and Joy Merchant to provide this award in his honor.
Both Kyle Dempster and Scott Adamson were athletes for Liberty Mountain and had become good friends with many of our employees. They are certainly missed. We are glad to hear the stories of the winners, like Talley, that were able to go out and do something amazing because of the award that Kyle’s loved ones created as a tribute.

Talley has been an outdoor professional since 2007 and has logged over 40,000 hours of in-field experience as a guide. When she isn't exploring mountain ranges, she teaches college courses that combine literary study and wilderness exploration through the Adventure Literature Series at The Pennsylvania State University. Talley plans to return to the High Route (for a third time!) in the summer of 2020.